Added 11 months ago by vindheim
37 Views
Living legend Paul McCartney is always "very happy" to hear about the deeply-held feelings people attach to this songs, like when our host divulges his personal connection to the Wings song 'Band On The Run.' #Colbert #Beatles #PaulMcCartney

Get the CBS app for iPhone & iPad! Click HERE: http://bit.ly/12rLxge

Get new episodes of shows you love across devices the next day, stream live TV, and watch full seasons of CBS fan favorites anytime, anywhere with CBS All Access. Try it free! http://bit.ly/1OQA29B

---
The Late Show with Stephen Colbert is the premier late night talk show on CBS, airing at 11:35pm EST, streaming online via CBS All Access, and delivered to the International Space Station on a USB drive taped to a weather balloon. Every night, viewers can expect: Comedy, humor, funny moments, witty interviews, celebrities, famous people, movie stars, bits, humorous celebrities doing bits, funny celebs, big group photos of every star from Hollywood, even the reclusive ones, plus also jokes. 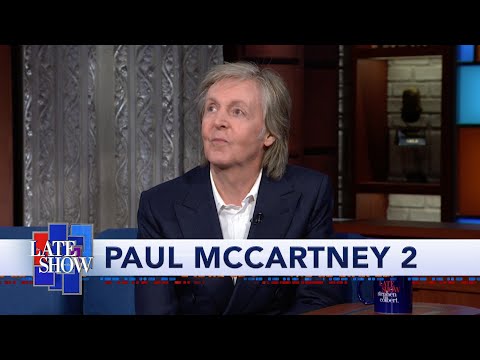 Living legend Paul McCartney is always "very happy" to hear about the deeply-held feelings people attach to this songs, like when our host d...